The National Heisey Collectors of America, Inc. facilitated the return of the Alfred M. Landon Frame / Emil J. Krall Exhibition Cabinet to the permanent National Heisey Museum Collection in 2011. It has been restored and put on permanent display in the Museum.

The Story
The story begins with the 1936 presidential election campaign of Republican Alf Landon. Wilson Heisey, then president of A.H. Heisey and Company, was Chairman of the Ohio for Landon effort. Prior to the Republican Convention, Wilson Heisey enlisted Emil Krall to engrave a large mirror frame to hold Alf Landon’s picture at the Convention. According to Krall’s own account, he traveled to Topeka, Kansas, to obtain a likeness of Landon, and then engraved a portrait of him for the top oval of the frame. According to Krall, it took four weeks totaling 480 hours to complete the project. The frame was of mirrors engraved with buckeyes and leaves, which were symbols of Ohio, and sunflowers, which was the state flower of Kansas, Landon’s home.

Once completed, Emil’s son Oscar Krall shared that it took seven hours to assemble the cut pieces onto the 79” X 48” frame — the large size befitting the prominence in which it was displayed at the convention, which was held at the Hollenden Hotel in Cleveland, Ohio. The frame was to be presented to Landon after he won the election; however, Landon lost the election and the frame was returned to Newark and placed into storage at the factory. 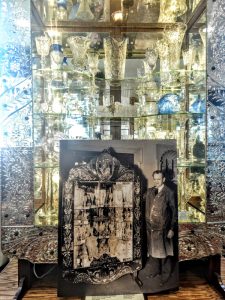 According to information in HCA archives, it was around this time that the Heisey Company was making plans for a promotional tour of major department stores of the Northeast and Midwest, including the J. L. Hudson Company, whose flagship store in downtown Detroit was the tallest department store in the world until 1961. The tour was to feature the cutting and engraving of Master Artist Emil Krall. Hudson’s agreed to share half of the expenses of Krall’s appearances, which amounted to $100 weekly. In December 1936, Krall designed a “shadow box” cabinet that could be entered from the rear.

This cabinet was to display the Landon frame. It was crafted in the woodshop at the factory. The shelving was glass, and cut Heisey candlesticks were used as supports for the shelves. The center medallion was replaced by Krall with an engraving of the Santa Maria in full sail. The frame was fixed onto the front of the mirrored cabinet. A special lighting system surrounded the inside of the frame. The cabinet displayed special Krall works of art, most one of a kind and obtained by special order only. The cabinet and its contents were insured for $15,000 — a large sum in the midst of the Depression.

Newspaper accounts made much of this insurance, and the resulting publicity played up the value of the glass. During one of these trips, the frame apparently slipped off a hand truck while it was being unloaded and was broken. Subsequently, Krall designed new mirrors with engravings of flowers for the sides of the cabinet; the engravings were done on glass that was later mirrored (silvered), and the center was one large glass surface.

According to Tim Heisey, several of the items on display in the cabinet were stolen at a stop in Chicago and never recovered. One of the last appearances of the cabinet under the direction of the Heisey Company was in March 1939, when Miss Lucille Adkins in conjunction with the Newark Chamber of Commerce set up a display of the famous “Alfred M. Landon Showcase”. This display included many of Krall’s one-of-a-kind pieces from the Heisey Company archives. 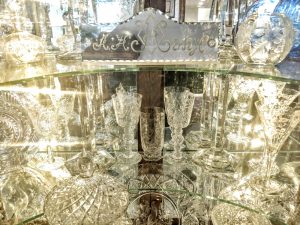 The Long Journey Home
When the Heisey Company closed, the cabinet was sold along with the contents of the Heisey factory to Percy Moore in 1957. Moore featured it in his antique shop on Route 40 in Kirkersville, Ohio, until it was sold to a collector who moved it to Texas. In the early 1970s, these owners returned the cabinet to Newark and offered it for sale; however, they were unable to reach a satisfactory sales arrangement and the cabinet was returned to their home.

The cabinet was offered to the National Heisey Glass Museum in the summer of 2011, and subsequently was acquired. Funding support was received from The John and Mary Alford Foundation, The Energy Cooperative Round-Up Foundation, and The Rotary Club of Newark- Heath. The Alfred M. Landon Frame / Emil J. Krall Exhibition Cabinet are now a display component of the A. H. Heisey & Company Factory Room in the King House of the National Heisey Glass Museum.